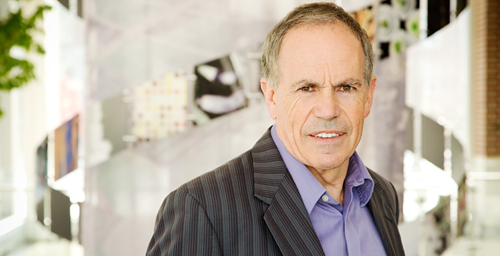 Teaching crop plants to concentrate carbon dioxide in their leaves could increase photosynthetic efficiency by 60 percent and yields by as much as 40 percent, researchers report in a new study.

“Photosynthesis is the most studied of all plant processes, so we really know this in great detail and can represent it well in silico,” said University of Illinois plant biology professor Stephen Long, who led the study with postdoctoral researcher Justin McGrath. “We’ve modeled the whole system, and added all the components in a cyanobacterial system one at a time to our computer simulation to see if they give us an advantage.”

The team found that some of the carboxysome genes hindered, while others greatly enhanced photosynthetic efficiency in crop plants such as soybean, rice and cassava. For example, adding a gene for a bicarbonate transporter, which carries carbon dioxide across the carboxysome membrane, enhances photosynthesis by 6 percent, Long said.

“And if we put in about eight components of the carboxysome system, the model says that we could get a 60 percent increase in photosynthesis,” he said.

The new findings appear in the journal Plant Physiology.

Modeling photosynthesis in crop plants has proven to be an efficient way to determine which kinds of genetic manipulations will be most fruitful, Long said. This prevents a lot of wasted time and money spent trying things in the laboratory that are doomed to fail.

The work is very exciting, but will take many years to implement, Long said.
“It will take about five years before we have our first test of concept in a model plant. And then, even if everything goes (according) to plan, it might be 15 or 20 years before we see this in any crop,” he said.

“The United Nations Food and Agricultural Organization predicts that we’re going to need about 70 percent more primary foodstuffs by the middle of this century,” Long said. “So obviously new innovations like this are needed to try and get there, especially since the approaches of the Green Revolution are now approaching their biological limits.”

Long also is a professor of crop sciences and a faculty member in the Carl R. Woese Institute for Genomic Biology.

The National Science Foundation and the Bill and Melinda Gates Foundation support this work.

Can the cyanobacterial carbon-concentrating mechanism increase photosynthesis in crop species? A theoretical analysis.