Boosting photosynthesis to feed the world 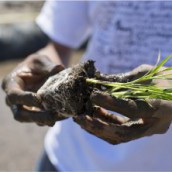 Researchers from around the globe have creative ideas about how to re-engineer photosynthesis to meet the food demands of the future.

In the half-century or so leading up to 2005, food production around the world grew by 160 percent. In the next 50 years, the human population and global affluence—both major drivers of agricultural demand—are only expected to increase; researchers estimate that food production will need to grow by 60 to 120 percent by mid-century to keep pace. Luckily, a few scientists might have an answer: In a perspective published today in PNAS, researchers present several ways that photosynthesis could be re-designed to meet agricultural demands.

Until now, breeders have been very successful at selecting for plants that capture a lot of light, and that partition a good amount of their biomass into the harvestable part of the plant. But today’s crops have nearly reached the theoretical limits for both.

"At a time when the Food and Agricultural Organization of the United Nations is saying that we need to double productivity to meet agricultural demand by the middle of the century, it’s pretty clear that the two components that drove the green revolution are used up," says Donald Ort, a professor of plant biology at the University of Illinois, and lead author on the perspective. "And what’s left is photosynthetic efficiency."

Natural evolution favors a competitor that hoards more resources like light than the plant can use just to rob its competitors of resources.

Photosynthesis evolved well for natural habitats, but not so well for agricultural ones. Natural evolution favors a competitor that hoards more resources like light than the plant can use just to rob its competitors of resources, whereas farmers favor good neighbors that use light efficiently. One future strategy may be to engineer crops to have photosynthetic systems with fewer light-harvesting pigments called chlorophylls. Lowering chlorophylls is easy, according to Ort, and low-chlorophyll plants could be among the first with re-designed photosystems to make it into farmers’ fields. But there are important trade-offs to consider.

"As we dial down the total amount of light that’s being absorbed by the crop canopy, it potentially makes more available for weeds to compete," Ort says. "Management is a very big part of maximizing productivity, and new management practices would have to go along with the design of these new crops."

Another limiting factor for crop production: inefficient carbon dioxide uptake. Modern crops have yet to adapt to take advantage of the ever-increasing levels of CO2 in the atmosphere, but photosynthetic bacteria and algae, which evolved in aquatic environments where carbon dioxide is less available, have active CO2 transporters. Adding the transporter genes to crop plants could increase carbon uptake, ultimately speeding up photosynthesis. Strategies that involve introducing genes from other organisms, however, may be slower to implement. Transgenes are subject to strict regulations, according to Ort, and major multinational seed companies can pay upwards of $100 million to put a single transgenic trait into crops.

"Demand is going up much more rapidly than it did in the past, yet our annual gains in world crop production are falling off," Ort says; creative, even radical ideas about re-designing photosynthesis may be necessary in order to feed the world of tomorrow.