Alge has long been known to be one of natures greatest carbon sinks, with some estimates being as high as 25% of carbon being captured into the biosphere by micro-organisms. Now researchers from The Australian National University (ANU) have engineered tiny carbon-capturing engines from blue-green algae into plants.

This breakthrough could not only lead to greater carbon capture but also help boost the yields of foods crops like wheat. Lead researcher Dr Ben Long from ANU said the discovery was a major leap forward in improving the way crops convert carbon dioxide, water and sunlight into energy – a process called photosynthesis, which is one of the main limitations to crop yield.

“For the first time, we have inserted tiny compartments from cyanobacteria – commonly known as blue-green algae – into crop plants that form part of a system that could lead to a 60 per cent increase in plant growth and yield,” said Dr Ben Long from the ANU Research School of Biology “Until now, inserting a carboxysome into a plant had been in the realm of science fiction and it has taken us more than five years to get to this point,” Dr Long said. “We are trying to insert a turbo-charged carbon-capturing engine into plants, by mimicking a solution that cyanobacteria – the ancestors of modern plant chloroplasts, the green compartments where plants make their own food – found millions of years ago.” 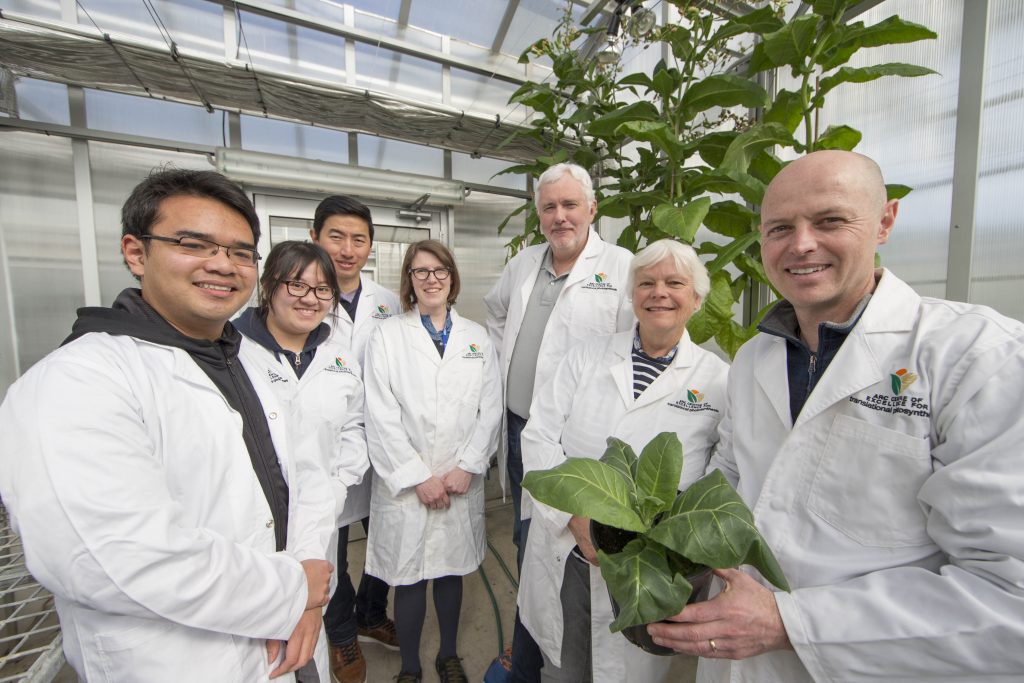 Researchers from the ARC Centre of Excellence in translational photosynthesis at the ANU have helped develop new techniques for improving photosynthesis in crops such as wheat, cowpeas and cassava. These improvements in photosynthesis has the potential to increase crop yields. From left to right is Nghiem D. Nguyen, Eng Kee Au, Wei Yih Hee, Eiri Heyno, Professor Dean Price, Professor Susanne van Caemmerer and Research Fellow Ben Long.

Rubisco, the enzyme responsible for fixing carbon dioxide from the atmosphere, is slow and finds it difficult to differentiate between carbon dioxide and oxygen, leading to wasteful energy loss. “Unlike crop plants, cyanobacteria use what’s called a ‘CO2 concentrating mechanism’ to deliver large amounts of the gas into their carboxysomes, where their Rubisco is encapsulated,” Dr Long said.

“This mechanism increases the speed in which CO2 can be turned into sugar and minimises reactions with oxygen.” The Rubisco enzyme inside cyanobacteria can capture carbon dioxide and generate sugars about three times faster than the Rubisco found in plants.

Computer models have shown that upgrading plant photosynthesis to use this mechanism will lead to a dramatic increase in plant growth and yield. “We still have a lot of work to do, but achieving this in tobacco plants was an absolutely essential step that has shown us we can expect to see crops with functional CO2 concentrating mechanisms in the future, producing higher yield,” Dr Long said. 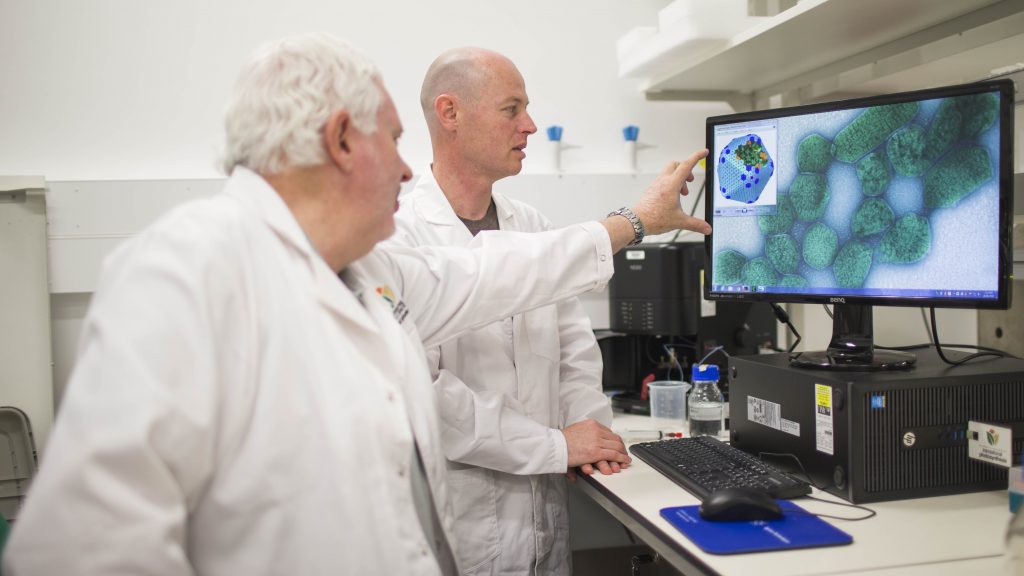 Researcher Fellow Ben Long and Professor Dean Price from the ARC Centre of Excellence in translational photosynthesis at the ANU, inspect a computer model as part of their development of new techniques for improving photosynthesis in crops such as wheat, cowpeas and cassava.

We sat down with Dr Ben Long to dive a bit deeper into this amazing discovery.

Q: We’re curious, why use Tobacco plants as your gunnie pig?

Dr Long: “Tobacco is a great model plant for us to work on in the lab. It’s easily manipulated genetically and relatively quick to grow and analyse. In addition, in the field, we can test its ability to grow like many other crops as it forms a dense canopy and is amenable to usual agricultural practices. This means we can do a lot of the hard science and testing in tobacco before translating successful outcomes to the crops we are really interested in improving”

Dr Long: “The aims of the RIPE consortium (https://ripe.illinois.edu/) are to translate our scientific outcomes to these crops as they are vital staple food crops in many developing nations and have broad application to the global population. Our specific work is a high-risk and long-term endeavour, but other work within the RIPE consortium is already making its way into relevant crops. There may be applications for this technology in the capture of CO2 industrially, although that’s not where we are looking. Hopefully, other researchers will see the benefits in our work from that point of view. Our work also generates real possibilities in the production and encapsulation of important proteins for, say, the biotech industry, where their breakdown during production is a current bottle-neck to productivity. Encapsulation of other protein cargoes in our plant-based carboxysomes could be a useful tool to make gains in those areas.”

Q: With so much anti-GMO sentiment in the community how will you bridge the knowledge gap to assure people it is safe?

Dr Long: “I disagree that there’s a large amount of anti-GMO sentiment in the community generally. As knowledge around these issues improves with education, I believe that people are generally aware that there are no inherent risks in this kind of technology and that we ensure relevant safeguards and regulation. A major reason for the need to improve photosynthetic performance in crops is that forecasts suggest current rates of crop improvement will not meet demand in the coming decades. Noting that our work is also very long-term and that demands to make crop improvements are urgent we recognise that efforts like ours must be done here and now, to ensure that technologies are ready for the field if and when the general population is ready for them. We can’t wait for debates on the issue to begin work like this. It’s already taken us five years to reach a good starting point for further development.”

Q: 60% increase in carbon sounds great, do you think your technology could be used to harvest more carbon to help combat climate change?

Dr Long: “This is theoretically possible but would have to happen on a more industrial scale. Keep in mind that the system we are trying to build into plant chloroplasts already exists in cyanobacteria and calculations suggest that around 25% of all global CO2 is already captured into the biosphere by micro-organisms which use this kind of CO2-concentrating mechanism. So it’s already happening on a grand scale. It will take some thinking but I think there would be potential applications on a larger scale.”

Q: What technology did you use to achieve this outcome?

Dr Long: “we used a synthetic biology approach, taking the genes we wanted from cyanobacteria and redesigning them for use in plant chloroplasts. So, while they code for the proteins found in cyanobacteria, the genes we have used are completely synthetic. Our simple carbon dioxide capturing carboxysomes are made from just 4 proteins, requiring 4 genes which we had synthesised. This has given us a basic ‘engine block’ which we can now tinker with to get the rest of the proteins we need to make the engine begin to hum. In all, we think at least another 5 or 6 proteins (and their synthetic genes) will be required to make our engine complete. However, the entire system will not work until we have our fuel injection system, protein pumps which pump bicarbonate (a soluble form of CO2) into cyanobacterial cells. The whole system needs to be put together in working order to make plants really capture CO2 faster and give us our predicted increases in yield.”

The research is supported by the Bill and Melinda Gates Foundation, the UK Department for International Development, and the Foundation for Food and Agriculture Research, through the Realizing Increased Photosynthetic Efficiency (RIPE) consortium, in close collaboration with members of the Australian Research Council Centre of Excellence for Translational Photosynthesis at ANU.

By: Cameron Costigan | Into the Void Science