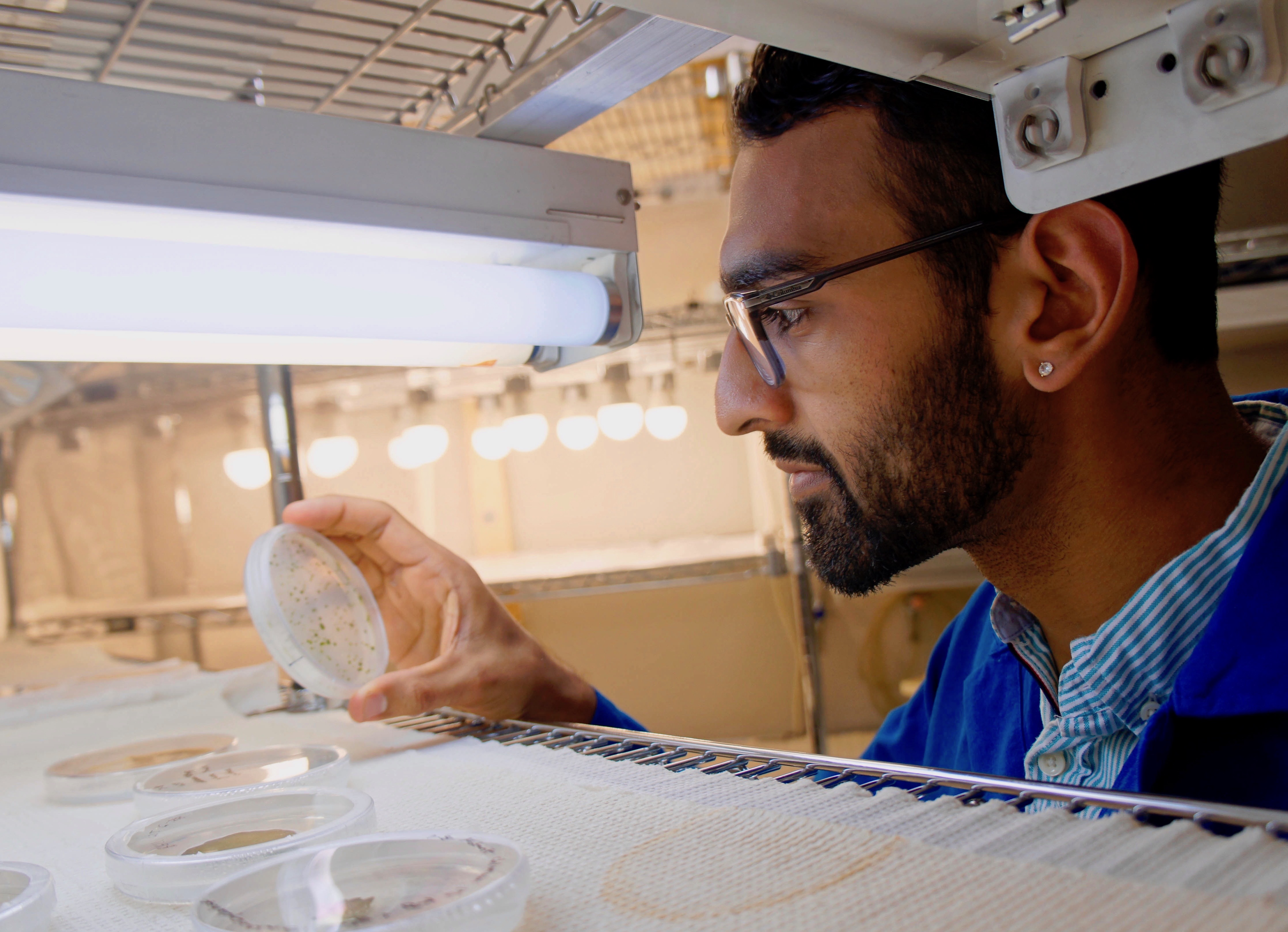 Dhruv Patel holds a petri dish between his fingers as he analyzes the green organisms that press against the clear surface. Under the lights in the growth chamber, which mimic midday sunlight, the algae reflect off the lens of his glasses and he records his observations. The photosynthetic creatures that he cradles are as fragile as the future of food security that he and other researchers like him are trying to achieve.

Dhruv knows that 78 percent of people in extreme poverty are smallholder farmers in extremely poor areas of the world. For them, escaping poverty is challenging because of their limited resources and unforgiving climate conditions. Dhruv wants to contribute towards finding new and innovative ways to help empower these farmers and one day feed the world.

With the increasing threats of climate change, global food security may seem like a radical dream. However, Dhruv is part of an innovative project, called Realizing Increased Photosynthetic Efficiency (RIPE) that brings together scientists from all over the world to develop future-proof crops with support from the Bill & Melinda Gates Foundation, Foundation for Food and Agriculture Research (FFAR), and the U.K. Foreign, Commonwealth & Development Office.

“Science has the capacity to drive real change,” Dhruv said, but what comes along with helping others is having the communication skills needed to convey this research to others. Since joining RIPE, Dhruv has developed a passion for science communication because he sees the importance of scientists using their voices to communicate with the public. “It wouldn't mean much if the research stays trapped in your lab notebook,” he said.

Dhruv earned his bachelor’s degree in plant and biological sciences from Cornell University and is currently a graduate student at the University of California, Berkeley, where he is working towards a doctoral degree in plant biology.

In 2019, Dhruv was named a FFAR Fellow. This three-year fellowship prepares the next generation of food and agriculture scientists for the workforce by providing hands-on support and mentoring from the industry. In addition, FFAR granted Dhruv an Early Career Researcher Award as a testament to his accomplishments as a FFAR Fellow. This past August, Dhruv Patel became one of three winners of the FFAR Fellows Lightning Talks Competition, a contest in which Fellows were tasked with creating a concise but dynamic presentation highlighting 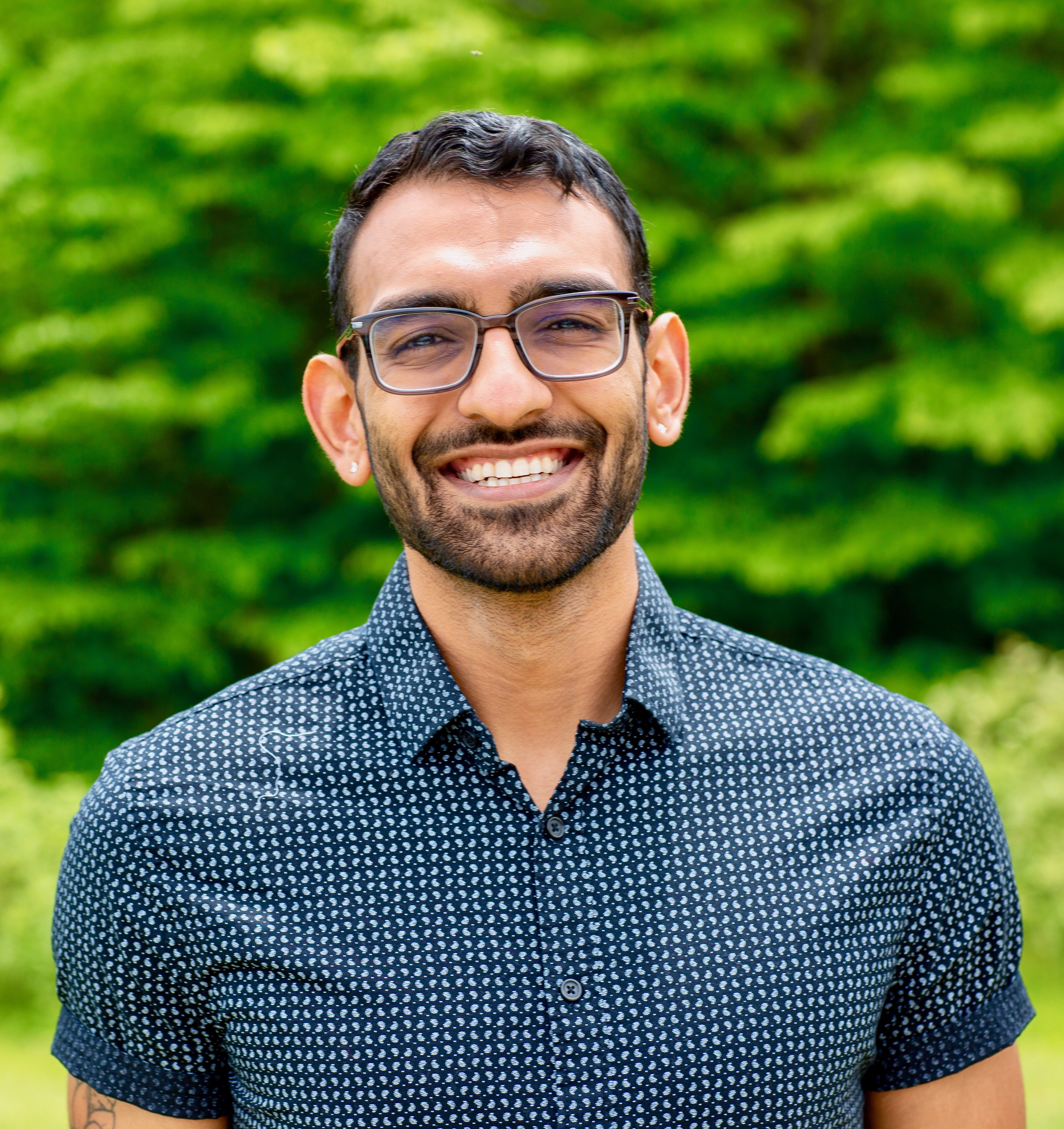 Dhruv starts his video with an analogy of enjoying a beautiful day and relishing kicking back and relaxing. However, while he can “be his lazy self,” plants cannot do the same.

Instead, plants spend all day creating food from sunlight, and for the plants that are in wide-open fields, the sunlight can be unforgiving. He explains that the energy from the sun—particularly direct sunlight—can be too much for plants to process. The sun’s radiation can get so intense that it damages the proteins needed to capture light. Plants rely on a process called “non-photochemical quenching”, a type of photoprotection, to rid themselves of that extra energy as heat.

But when photoprotection is even a fraction out of sync, it can cost plants up to 10-30% of their ability to photosynthesize. This leads to reduced plant productivity, or to Dhruv, a lot of wheat that is not being made into cupcakes. Dhruv hopes to bring the science community closer to fine-tuning how efficiently crops can capture sunlight and turn it into food.

Winning the FFAR Fellows Lightning Talks Competition has only reinforced his belief of the importance of breaking free from the “rigid, complex writing of academia.”

Science, Dhruv explained, has traditionally locked itself within its own ivory tower, hidden by paywalls, and riddled with jargon that limits how broadly its research and messages can be received.

Dhruv hopes that with his research and a strong emphasis on building bridges between the scientific community and the general public, he can help break the reclusive scientist stereotype, increase accessibility to all of their exciting discoveries, and fight misinformation along the way.