After nine years of intensive trials of the Bacillus thuringiences (Bt) cowpea (beans), Nigeria finally begins the final processes towards the commercialisation of the crop with a public presentation to get input from scientists, farmers, policymakers, civil society organisations, experts, faith-based organisations and the media.

The public presentation by the nation’s biotech regulatory agency, the National Biosafety Management Agency (NBMA) which is the preliminary decision making process before the commercialisation of genetically modified pod borer resistant (PBR) cowpea in Nigeria saw scientists, farmers, policymakers, civil society and faith-based organisatons from within Nigeria and other West African countries rooting for the technology, underscoring the tremendous benefits the nation stands to gain by its adoption and application. 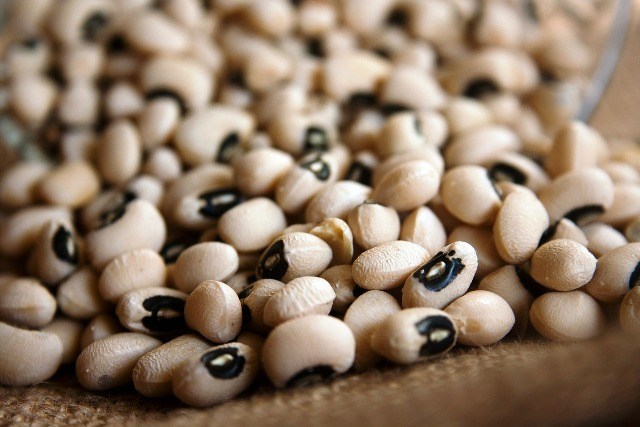 In his opening remarks at the presentation in Abuja, the director-general of NBMA, Dr Rufus Ebegba, said application for commercial release of the GM food crop, being the first of its kind and in line with the NBMA Act, required the agency to build on past efforts to make certain that stakeholders are aware of the basic science of PBR cowpea and the biosafety measures put in place by NBMA.

He highlighted the objectives of the presentation to include allowing the PBR cowpea’s principal investigator, Prof. Muhammad Ishiyaku, to take stakeholders through the basic science of the GM cowpea and other issues relevant to the safety of the gene of insert, the processes of the development of the GM cowpea, the risk assessment on food and environmental safety carried out to enable stakeholders gain a better understanding of the GM PBR cowpea and the biosafety measures in place, and give them the opportunity to express their concerns and ask pertinent questions.

In his presentation, ‘Science of pod borer resistant cowpea’, Ishiyaku pointed out that scientists decided to turn to GM to tackle the Maruca vitrata pest infestation in cowpea which leads to high loss of up to 80 percent of farmers because of several unsuccessful wide crossing, saying the confined field trial (CFT) was to confirm laboratory observation under field conditions, efficacy of gene under natural environment of production, its expression level and interaction of the genotype by environment if any, a trial he described as highly successful.

Listing the gains of the technology, he said studies from the trials showed that the Bt (pod borer resistant (PBR) cowpea could drastically reduce the use of pesticide and increase yield up to 20 percent which translates to N48 billion annually at the rate of N120,000 per tonne. 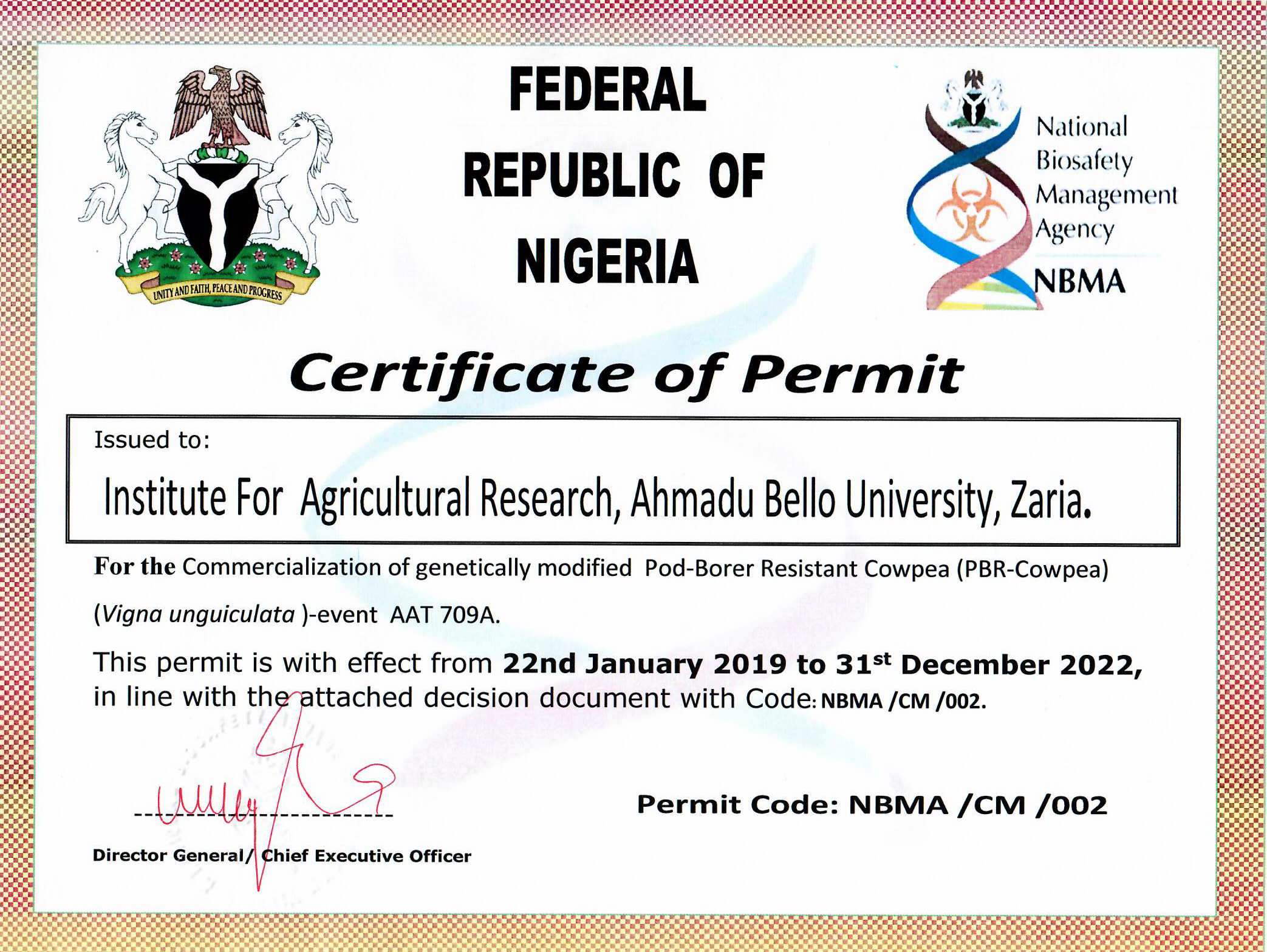 Speaking to journalists, the director-general of the National Biotechnology Development Agency (NABDA), Prof. Alex Akpa, said the presentation was very important because of the important role cowpea plays in the nation’s food chain, pointing out that Nigeria needs the technology to feed its rapidly growing population as it cannot do so relying only on ‘hoe and knife’ type of agriculture.

“This public presentation is very important because cowpea is a major food product in this country. It is the protein source of the common man. It is a very useful product and before this invention beans farming has been a major problem for farmers but now with this new technology, we will now have beans that will be resistant to Maruca, a pest that destroys up to 80 percent of this crop. This will lead to hundreds of billions of naira savings not only to farmers but for the country. In addition, it will lead to the reduction in the use of pesticides which do not only destroy the environment but are also harmful to those who apply them,” he said.

The secretary-general of the Epidemiological Society of Nigeria, Dr. Matthew Ashikeni, in his remarks, averred that the commercialization of Bt Cowpea would help tackle malnutrition in the country, especially in children.

“Today one of the greatest problems we have is malnutrition, go to the northeast there’s an epidemic, in fact, there’s an emergency and if we can combat malnutrition by-products that have been developed and tested in the country by our own scientists, regulated by our own agency then we should be proud,” he stated.

Ashikeni who is also the president of Catholic Doctors in Abuja, a faith-based organisation, expressed the group’s support for the technology, saying the Nigerian-driven research should be wholly supported once its efficacy and safety are guaranteed.

“Once they have demonstrated the benefits, efficacy, and safety of the product, anyone that’s opposing that has another agenda but as far as we are concerned once the scientific due process has been followed and the product is safe, we support that. So, we support this and we will be completely behind the agency in her regulatory effort to make sure Nigeria benefits maximally from scientific knowledge and technology that will bring relief to all Nigerians,” he added.

Speaking exclusively to our reporter, the executive director, Citizens Advocacy for Social and Economic Rights (CASER), Mr Frank Tietie, commended the regulatory agency for taking into consideration food as well as human safety while considering this technological advancement and also for introducing new technologies with regards to food production, saying modern biotechnology means food security because the increase in food production translates to food security and this guarantees an improved living standard of the ordinary Nigerian citizen.

“From the outset, we in the economic rights advocacy community have been worried that we have not maximized the benefits of technology in the area of food production enough. For me, I am more than confident that other Nigerians, many economic and social rights advocates would accept and promote modern agricultural biotechnology which is to the benefit of Nigerians,” he added.

Similarly, a member of the Ghanaian Council of State, Hon. Nana Brempong, who is also a commercial farmer, advised the Nigerian leadership to consider GMOs because of their numerous benefits, saying it would be in the interest of the nation to embrace modern biotechnology to boost its nutrition and economy.

“I am advising the Nigerian president to consider GMOs because I’ve seen it and know the benefits. We Africans are too scared of innovations. We’ve been eating GMOs since God knows when but we don’t want to plant it over here, which is confusing,” she said.

Ebegba said NBMA would place a 21-day public notice in three national dailies and on its website at the end of the presentation indicating locations where the application/dossier would be deposited to enable members of the public to review the application and present their views to the agency, adding it would also constitute a national biosafety committee and national biosafety technical sub-committee of eminent experts and scientists to carry out a detailed review of the risk assessment and management and make recommendations to guide the NBMA’s final decision.

“After our approval, other regulatory agencies have to play their role like the varietal release committee. Once it passes through our regulatory system and we confirm it safe they will have to meet other requirements. It could take about one year before it comes into the market,” he added.

By: Leadership, a Nigerian newspaper