Plants botch photosynthesis 20% of the time. Fixing that could change agriculture

Billions of years ago, the air on Earth was dominated by carbon dioxide. This was great for plants; they had evolved photosynthesis to snatch carbon dioxide from the air, combine it with sunlight, and convert it into sugars they could use as energy. And conveniently for future humans and other animals, the plants spit back out oxygen when the process is done.

But there’s a glitch. To plants, carbon dioxide (CO2) looks a lot like oxygen (O2), so sometimes they grab O2 in error. Back when photosynthesis first evolved, plants didn’t need to be particularly discerning; there was so much CO2 to go around that sucking up a few stray O2s didn’t slow any single plant down much.

Fast forward to the modern era: Our oxygen-rich air is confusing as hell to a plant. They never fully honed the art of telling O2 apart from CO2. And about 20% of the time, they mix them up: a vain attempt at making a sugar meal is foiled by a pesky oxygen molecule. The attempt to process the oxygen creates glycolate and ammonia, both toxic to the plant. Plants have a complex pathway for recycling those toxins into carbon dioxide called “photorespiration,” but it’s a real hassle: depending on the type of plant, it can use up some 30% of its daily energy, which it would otherwise use for growing.

In the wild, plants carry on photosynthesizing and photorespirating, and humans aren’t keen to fiddle with their growth. But agriculture is a story of optimization. In a world where the increase in mouths to feed is outpacing growth in agricultural productivity, this photosynthesis “glitch” has a lot of scientists’ interest. It’s a built-in bottleneck to the amount of food that gets produced. In the US, photorespiration is believed to decrease soybean yields by 36%, and wheat yields by 20%.

What if we could fix it?

A team of researchers at the University of Illinois and the US Department of Agriculture published a paper in the journal Science on Jan. 4 that found a possible mechanism to do just that. They injected genes from pumpkin and green algae into the chloroplast of tobacco plants, the part of the plant cell where photosynthesis happens. “They’re two genes that scientists have studied and knew really well,” says Amanda Cavanagh, a plant biochemist at the University of Illinois, and an author on the study. They knew from modeling that the genes could do the job of a photorespiration pathway; their task was to make it sleeker than the one the tobacco plants had before, like straightening a circuitous highway.

The team fiddled with genetic combinations until they found one that could shut down the tobacco plant’s photorespiration pathway and replace it with a more efficient one made from the algae and pumpkin genes. They essentially built a shortcut, prompting the plant to rapidly recycle any O2 it absorbed. A recycling process that previously moved through three compartments in the plant cell now moved through only one. What’s more, the CO2 emitted from the process was directed, through this new pathway, to release within the cell where photosynthesis takes place. The CO2 could be taken up again and used as food immediately. The genetic tweak resulted in tobacco plants that grew as much as 40% larger than their normal counterparts. 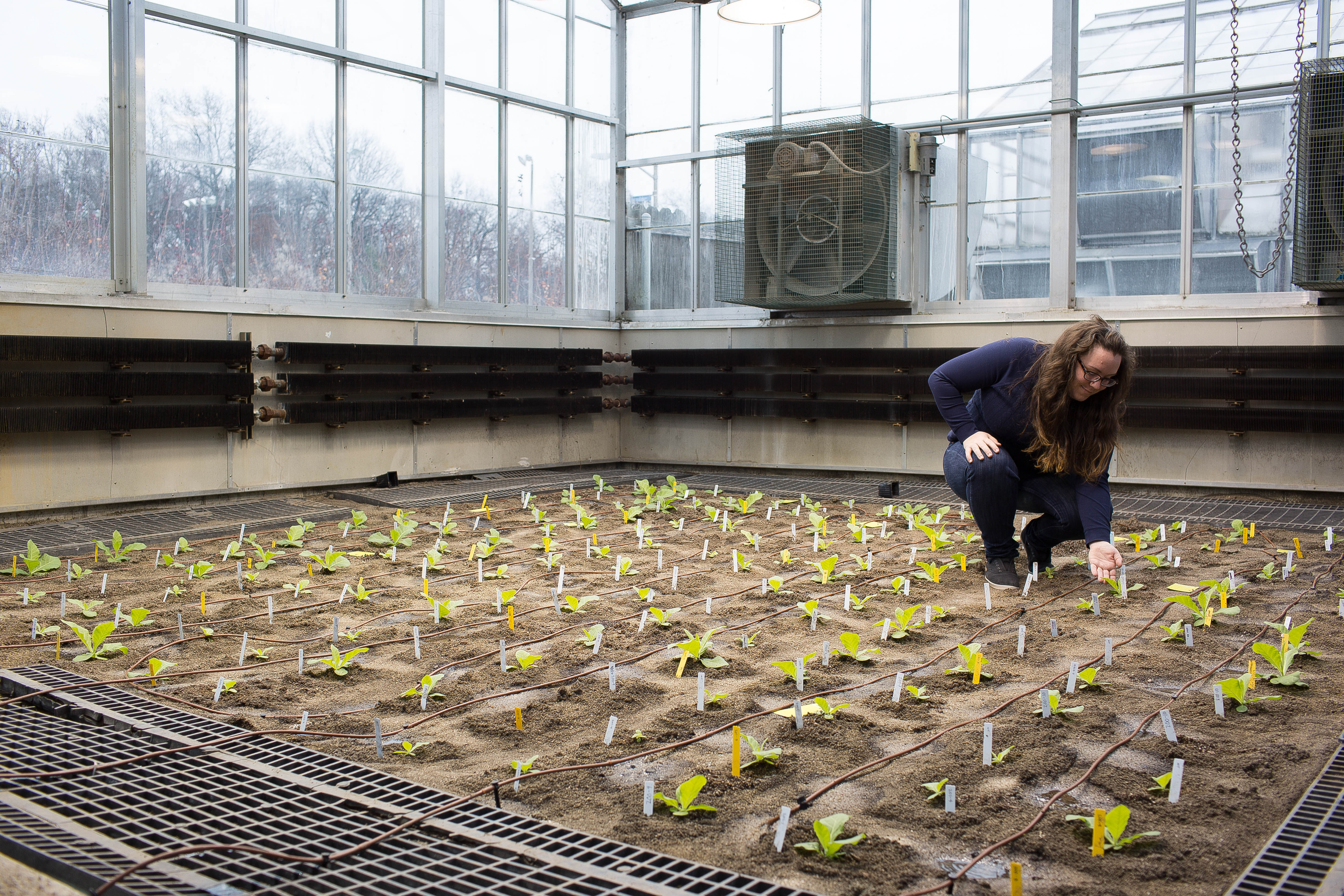 Amanda Cavanagh, a plant biochemist at the University of Illinois, tests tobacco plants engineered with the upgraded oxygen-recycling pathway in a lab greenhouse.

The paper is one of several to come out of a multi-million-dollar initiative targeted precisely at finding work-arounds to these bottlenecks in photosynthesis, with the aim of boosting crop production. The aptly acronymed RIPE (Realizing Increased Photosynthetic Efficiency) program is funded by the Bill and Melinda Gates Foundation, the Foundation for Food and Agriculture Research, and the UK Department for International Development. Other notable findings include a 2016 paper, in which RIPE researchers reported a way to make tobacco plants grow 20% bigger by genetically altering them to respond more quickly to changes in sunlight.

Now Cavanagh and her colleagues are testing if, and how, the tweak to the oxygen-recycling pathway would work on crop plants like soybeans and cowpea in their lab. Another question they hope to answer is whether the modified crops have a different nutritional value than their unaltered kin, because the genetic modification will essentially feed the plant more CO2. “One of the things we do know is that more carbon dioxide produces less nutritious grains,” Cavanagh says. That is a chief concern of food security in the climate-change era: higher CO2 concentrations in the atmosphere can make plants grow more, yes, but research has also shown that more CO2 means lower concentrations of nutrients. In one 2018 study, higher CO2 levels translated to rice crops with lower concentrations of protein, B-vitamins, and important minerals like zinc and iron.

But Cavanagh is hopeful, and notes that as the global climate warms, finding a way to solve for photorespiration will be ever more dire: Right now, plants are absorbing around one-third of the excess carbon dioxide humans are pumping into the atmosphere, and turning it into sugars to grow. As carbon dioxide levels rose, global photosynthesis ramped up. But as temperatures rise, plants will start to offset less and less carbon dioxide, and probably already have. That’s because as the air warms, plants are less able to discern between oxygen and carbon dioxide, and photorespiration rates go up. Our warming planet will surely result in more yield losses to this “glitch,” and less of a plant buffer to our carbon emissions, too.