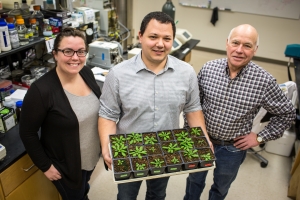 Instead of turning carbon into food, many plants accidentally make a plant-toxic compound during photosynthesis that is recycled through a process called photorespiration. University of Illinois and USDA/ ARS researchers report in Plant Cell the discovery of a key protein in this process, which they hope to manipulate to increase plant productivity.

“Photorespiration is essential for C3 plants, such as rice and soybeans, but operates at the massive expense of fixed carbon and energy,” said project lead Don Ort, USDA/ARS scientist and the Robert Emerson Professor of Plant Biology at Illinois. “We have identified photorespiration as a primary target to improve photosynthetic efficiency as a strategy to improve crop yield. Successfully re-engineering photorespiration requires deep knowledge of the process, for which understanding of transport steps is most lacking.”

Related to a family of transport proteins that move bile around in animals, the newly discovered role of the plant protein Bile Acid Sodium Symporter 6 (BASS6) is to transport the toxic product glycolate out of the chloroplast where it is recycled into a useful sugar molecule (glycerate) through a series of chemical reactions, which release carbon dioxide and harmful ammonia while sacrificing energy.

Since the 1960s, researchers have known that plant chloroplasts export two molecules of glycolate to recover one molecule of glycerate. However, the chemical equation did not add up until now with the discovery of the function of BASS6, the second glycolate transport protein to be described since the glycolate/glycerate exchange transporter “PLGG1” was described in 2013.

“Now we’re going to try to make a shortcut to avoid all the wasteful steps in photorespiration,” said Paul South, a USDA/ARS postdoctoral researcher who led this work at the Carl R. Woese Institute for Genomic Biology at Illinois. “We’re building a shortcut to quickly process glycolate into glycerate instead of letting BASS6 and PLGG1 take the country roads. One of the benefits of the shortcut is that the plants don’t produce ammonia, so they don’t have to spend a lot of energy re-fixing the ammonia.”

"We could feed around 200 million people with the calories lost to photorespiration each year just in the Midwestern United States,” said co-author author Berkley Walker, an Alexander von Humboldt Postdoctoral Fellow at the University of Düsseldorf, citing his recently published simulations. "While we can't get all that yield back, even saving 5% of the energy in lost in photorespiration would be worth millions of dollars annually.”

The paper “Bile acid sodium symporter BASS6 can transport glycolate and is involved in photorespiratory metabolism in Arabidopsis thaliana” is published by Plant Cell (DOI: 10.1105/tpc.16.00775). Co-authors include Amanda Cavanagh at Illinois and Vivien Rolland and Murray Badger at the Australian National University.