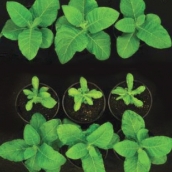 Enabling improvements to crop yield and resource use by enhancing the catalysis of the photosynthetic CO2-fixing enzyme Rubisco has been a longstanding challenge. Efforts toward realization of this goal have been greatly assisted by advances in understanding the complexities of Rubisco’s biogenesis in plastids and the development of tailored chloroplast transformation tools. Here we generate transplastomic tobacco genotypes expressing Arabidopsis Rubisco large subunits (AtL), both on their own (producing tobAtL plants) and with a cognate Rubisco accumulation factor 1 (AtRAF1) chaperone (producing tobAtL-R1 plants) that has undergone parallel functional coevolution with AtL. We show AtRAF1 assembles as a dimer and is produced in tobAtL-R1 and Arabidopsis leaves at 10–15 nmol AtRAF1 monomers per square meter. Consistent with a postchaperonin large (L)-subunit assembly role, the AtRAF1 facilitated two to threefold improvements in the amount and biogenesis rate of hybrid L8AS8t Rubisco [comprising AtL and tobacco small (S) subunits] in tobAtL-R1 leaves compared with tobAtL, despite >threefold lower steady-state Rubisco mRNA levels in tobAtL-R1. Accompanying twofold increases in photosynthetic CO2-assimilation rate and plant growth were measured for tobAtL-R1 lines. These findings highlight the importance of ancillary protein complementarity during Rubisco biogenesis in plastids, the possible constraints this has imposed on Rubisco adaptive evolution, and the likely need for such interaction specificity to be considered when optimizing recombinant Rubisco bioengineering in plants.