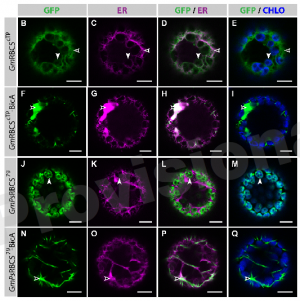 Most major crops used for human consumption are C3 plants, which yields are limited by photosynthetic inefficiency. To circumvent this, it has been proposed to implement the cyanobacterial CO2-concentrating mechanism (CCM), principally consisting of bicarbonate transporters and carboxysomes, into plant chloroplasts. As it is currently not possible to recover homoplasmic transplastomic monocots, foreign genes must be introduced in these plants via nuclear transformation. Consequently, it is paramount to ensure that resulting proteins reach the appropriate sub-cellular compartment, which for cyanobacterial transporters BicA and SbtA, is the chloroplast inner-envelope membrane (IEM). At present, targeting signals to redirect large transmembrane proteins from non-chloroplastic organisms to plant chloroplast envelopes are unknown. The goal of this study was to identify such signals, using agrobacteria-mediated transient expression and confocal microscopy to determine the sub-cellular localization of ∼37 GFP-tagged chimeras. Initially, fragments of chloroplast proteins known to target soluble cargos to the stroma were tested for their ability to redirect BicA, but they proved ineffective. Next, different N-terminal regions fromArabidopsis IEM transporters were tested. We demonstrated that the N-terminus of AtHP59, AtPLGG1 or AtNTT1 (92–115 amino acids), containing a cleavable chloroplast transit peptide (cTP) and a membrane protein leader (MPL), was sufficient to redirect BicA or SbtA to the chloroplast envelope. This constitutes the first evidence that nuclear-encoded transmembrane proteins from non-chloroplastic organisms can be targeted to the envelope of plant chloroplasts; a finding which represents an important advance in chloroplast engineering by opening up the door to further manipulation of the chloroplastic envelope.