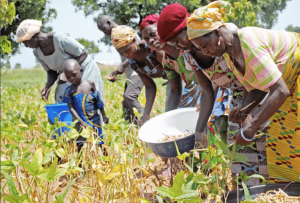 A project begun nearly 15 years ago is finally coming to fruition, as Nigeria is poised to become the first country to release a genetically modified variety of insect-resistant cowpeas to farmers.

“The cowpea growers have been very supportive. They like the GM crop. They have seen it perform and they are ready to grow it," Issoufou Kollo Abdourhamane, the project's manager at the African Agricultural Technology Foundation (AATF), told me.

Cowpeas, known as black-eyed peas in the United States, are a key source of protein for over 200 million people, mostly in West Africa. However, the destructive pod borer insect can cause yield losses of up to 80 percent, and conventional breeding methods have been unable to help.

The GMO crop has shown strong resistance to the pest in field trials so far. Scientists used genetic engineering to insert a single gene from Bacillus thuringiensis (Bt), a soil bacterium commonly used as an approved natural insecticide and sprayed on crops by organic farmers.

Several crops now utilize the Bt technology to protect against insects, including corn and soybeans in the US, cotton in the US and India, and eggplant in Bangladesh. Monsanto developed the first Bt crop, corn, in 1996. Today, over 75 percent of the corn grown in the US is Bt.

The intellectual property for the Bt gene was provided by Monsanto to the project royalty-free. This, along with initial funding from the Rockefeller Foundation and sustained funding for the past decade from the US government’s Agency for International Development (USAID), will allow the seeds to be distributed to farmers at no cost. The company has also provided Bt traits royalty-free for other development projects, such as eggplant in Bangladesh and corn in Africa.

“There is a widespread belief that only large biotechnology companies can deliver valuable transgenic crops to smallholder farmers,” said Stephen Long, a crop scientist at the University of Illinois. “This public sector collaboration between Australia, Nigeria, and other West African countries shows that with modest support these technologies can reach some of the least well-off farmers in the world.”

Nigeria, which has been conducting field trials of the Bt cowpeas since 2009, is expected to approve the crop this year, which would be its first GMO food crop. The country passed a law governing agricultural biotechnology in 2015. Ghana and Burkina Faso are currently conducting field trials of the cowpeas, and scientists there hope farmers will have access to the seeds in a few years.

“Farmers have shown a lot of appreciation at the results they see during field days and are always asking us when they can have seeds to plant on their fields," explained Mumuni Abudulai, one of the scientists working on the project in Ghana.

“If we can get a 15-20 percent increase in grain yield in cowpea then this would have a major impact on food and nutritional security in Africa,” said T.J. Higgins, a research scientist who helped develop the Bt cowpea at Australia’s Commonwealth Scientific and Industrial Research Organisation (CSIRO). He estimates that the GMO variety will increase the average farmers’ yields from around 700 kilograms (~1,540 pounds) per hectare to closer to one tonne (~2,205 pounds). (One hectare is a little less than 2.5 acres.)

"No farmer cultivates cowpea without insecticides in Ghana. He will harvest nothing," Abudulai said.

With built-in protection against insects, Bt crops have been shown to decrease the need for pesticide spraying. Bt genes are able to selectively target certain insect pests, including the pod borer, without affecting beneficial insects.

“This means that instead of spraying between six to eight times while growing cowpea in order to get good yield, with only about two sprays the farmer can get as much yield,” Mahammad Ishiyaku, the 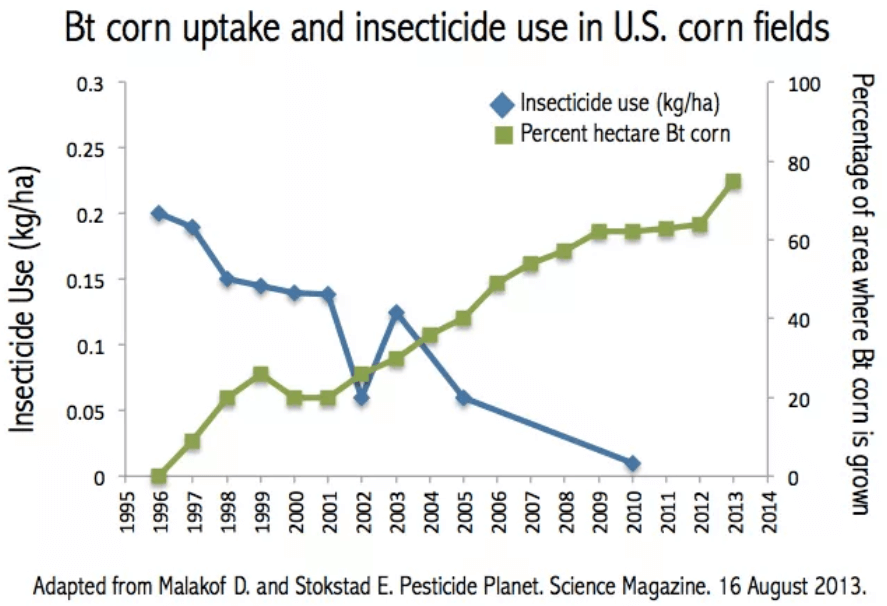 The reduction in insecticide use will also benefit farmers economically. Instead of six to eight liters per hectare, farmers will only need two to three liters, saving them roughly $5,400 Nigerian naira (about $15 US dollars), per hectare. If just 1 million of the 3 million hectares of cowpea in Nigeria are converted to the GMO variety, the country's farmers would save an estimated $16.2 billion naira ($45.2 million USD) annually on the cost of insecticides. Additionally, the new seeds are expected to increase yields 20 percent, which could provide an economic boost of $48 billion naira ($133.9 million USD) annually.

Historically, pesticides were difficult to get and expensive for farmers in West Africa, but they’re becoming more widespread due to an influx of cheap imports. However, insecticides are often sold to farmers in soda bottles, with little or no training on how to use them safely and effectively.

“When people can afford them they tend to overspray,” said a USAID official who asked not to be identified. “Removing potentially toxic pesticides from the equation is a good thing.”

A crucial element of the project has been crossing the Bt cowpea strain that Australian scientists developed with local varieties that are adapted to the area's conditions and farmers' preferences. Government breeders in West Africa have been working for years, with much success, to improve local cowpea varieties via conventional methods in order to increase yield, drought-tolerance and other important variables.

“The real heroes of this are the breeders and the entomologists in Africa," Higgins, the Australian scientist, professed. “They’re the ones who keep me motivated, because of their need for this technology.”

The variety that Nigerian farmers hope to have access to in 2018 will contain the Cry1Ab gene, but researchers are working on adding more Bt traits to help protect against the possibility that the pod borer could evolve resistance to the single gene. They’ve already developed a variety with both the Cry1Ab gene and a second Bt gene, Cry2Ab, and are currently working on a third, Vip3Ba. However, Higgins doesn’t anticipate the pest will develop resistance for at least 15 to 20 years, if at all, and is confident they’ll be able to get cowpea varieties with three or more “stacked” insect-resistant traits to farmers soon.

Field trials of biotech crops in West Africa are required to be protected by fences and guards at all times. Part of the justification is to protect the crop against potential vandalism from anti-GMO activists, as has happened in other parts of the world. A more pressing reason in West Africa, however, is that the government and researchers worry that if nearby farmers see how well the crop is doing, they’ll rush in and take the plants for themselves, thus ruining the field trial.

“The field would be bare,” the USAID official said. “As soon as the farmer sees what this technology does, the next question is ‘where do I get it?’ The argument is over at that stage.”

Several of the West African scientists I talked to were frustrated by the efforts of anti-GMO activists in their countries to demonize biotech crops. They suspect many of the activists are funded by environmental non-governmental organizations based in the US and Europe, such as Greenpeace and Friends of the Earth.

“It is very frustrating to us. It is frustrating for science. Nigerians are working for foreign organizations to deny a good product to their own people. And this is based not on scientific fact but on manufactured lies. Totally made up. No scientific base. It is tragic and frustrating," said Abdourhamane, the AATF researcher.

“More needs to be done to make people understand what is behind GM crops," said Batieno Benoît Joseph, a cowpea breeder in Burkina Faso. "People still have in their minds that GM crops are monsters."

The USAID official said anti-GMO activists in the US and Africa have a lot in common, and that both are often exposed to misleading information about biotechnology by way of popular media.

US funding and support

For USAID, the cowpea is a strategically important crop in the fight against extreme poverty in West Africa. Despite the fact that farmers comprise more than half of the population of Africa, the continent imports around $35 billion worth of food annually. Despite this, roughly 40 percent of children in sub-Saharan Africa suffer from malnutrition.

“We convinced the leadership at Monsanto that this would be a good thing to do,” said the USAID official, who worked at Monsanto at the time. “It was a problem that we knew how to fix as scientists, and there was a group of people who needed it.”

“I really admire the USAID and the African Agricultural Technology Foundation (AATF) for their sustained support for the project,” said Higgins, the Australian researcher. “It really does require a visionary view of the world to look at a project like that, which [was] definitely going to take ten to 15 years to get to the farmers.”

USAID currently funds over a dozen biotech crop projects, according to the USAID official, ranging from vitamin-A enhanced rice in the Philippines to blight-resistant potatoes in Uganda.

“We basically align a technology to a need,” said the USAID official, who called genetically engineered crops a “science-based tool” to combat poverty. “In this case, there was no other mechanism to control this pest efficiently, and biotechnology happened to be one that could do it very effectively.”

“There will be more biotech projects,” the official continued. "There’s no doubt about it.”