Evolution and diversity of CO2 concentrating mechanisms in cyanobacteria 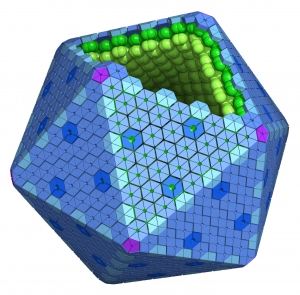 Cyanobacteria have developed an effective photosynthetic CO2 concentrating mechanism (CCM) for improving the efficiency of carboxylation by a relatively inefficient Rubisco. The development of this CCM was presumably in response to the decline in atmospheric CO2 levels and rising O-2, both of which were triggered by the development of oxygenic photosynthesis by cyanobacteria themselves. In the past few years there has been a rapid expansion in our understanding of the mechanism and genes responsible for the CCM. In addition, there has been a recent expansion in the availability of complete cyanobacterial genomes, thus increasing our potential to examine questions regarding both the evolution and diversity of components of the CCM across cyanobacteria. This paper considers various CCM and photosynthesis gene components across eight cyanobacteria where significant genomic information is available. Significant conclusions from our analysis of the distribution of various genes indicated the following. Firstly, cyanobacteria have developed with two types of carboxysomes, and this is correlated with the form of Rubisco present. We have coined the terms a-cyanobacteria to refer to cyanobacteria containing Form 1A Rubisco and alpha-carboxysomes, and beta-cyanobacteria having Form 1 B Rubisco and beta-carboxysomes. Secondly, there are two NDH-1 CO2 uptake systems distributed variably, with Prochlorococcus marinus species appearing to lack this CO2 uptake system. There are at least two HCO3- transport systems distributed variably, with some a-cyanobacteria having an absence of systems identified in P-cyanobacteria. Finally, there are multiple forms of carbonic anhydrases (CAs), but with only beta-carboxysomal CA having a clearly shown role at present. The a-cyanobacteria appear to lack a clearly identifiable carboxysomal CA. A pathway for the evolution of cyanobacterial CCMs is proposed. The acquisition of carboxysomes triggered by the rapid decline of atmospheric CO2 in the Phanerozoic is argued to be the initial step. This would then be followed by the development of NDH-1 CO2-uptake systems, followed by the development of low-and high-affinity HCO3- transporters. An intriguing question is, were carboxysomes developed first in cyanobacteria, or did they originate by the lateral transfer of pre-existing proteobacterial bacterial microcompartment genes? The potentially late evolution of the CCM genes in cyanobacteria argues for a polyphyletic and separate evolution of CCMs in cyanobacteria, algae, and higher plants.