Rubisco activity and regulation as targets for crop improvement 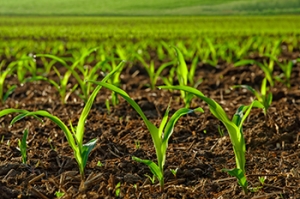 Rubisco (ribulose-1,5-bisphosphate (RuBP) carboxylase/oxygenase) enables net carbon fixation through the carboxylation of RuBP. However, some characteristics of Rubisco make it surprisingly inefficient and compromise photosynthetic productivity. For example, Rubisco catalyses a wasteful reaction with oxygen that leads to the release of previously fixed CO2 and NH3 and the consumption of energy during photorespiration. Furthermore, Rubisco is slow and large amounts are needed to support adequate photosynthetic rates. Consequently, Rubisco has been studied intensively as a prime target for manipulations to osupercharge’ photosynthesis and improve both productivity and resource use efficiency. The catalytic properties of Rubiscos from diverse sources vary considerably, suggesting that changes in turnover rate, affinity, or specificity for CO2 can be introduced to improve Rubisco performance in specific crops and environments. While attempts to manipulate plant Rubisco by nuclear transformation have had limited success, modifying its catalysis by targeted changes to its catalytic large subunit via chloroplast transformation have been much more successful. However, this technique is still in need of development for most major food crops including maize, wheat, and rice. Other bioengineering approaches for improving Rubisco performance include improving the activity of its ancillary protein, Rubisco activase, in addition to modulating the synthesis and degradation of Rubisco’s inhibitory sugar phosphate ligands. As the rate-limiting step in carbon assimilation, even modest improvements in the overall performance of Rubisco pose a viable pathway for obtaining significant gains in plant yield, particularly under stressful environmental conditions.