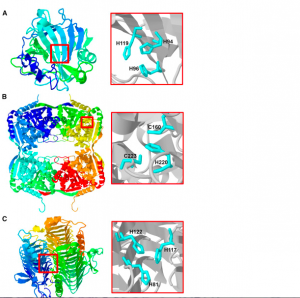 Carbonic anhydrases (CAs) are zinc metalloenzymes that catalyze the interconversion of CO2 and HCO3− and are ubiquitous in nature. Higher plants contain three evolutionarily distinct CA families, αCAs, βCAs, and γCAs, where each family is represented by multiple isoforms in all species. Alternative splicing of CA transcripts appears common; consequently, the number of functional CA isoforms in a species may exceed the number of genes. CAs are expressed in numerous plant tissues and in different cellular locations. The most prevalent CAs are those in the chloroplast, cytosol, and mitochondria. This diversity in location is paralleled in the many physiological and biochemical roles that CAs play in plants. In this review, the number and types of CAs in C3, C4, and crassulacean acid metabolism (CAM) plants are considered, and the roles of the α and γCAs are briefly discussed. The remainder of the review focuses on plant βCAs and includes the identification of homologs between species using phylogenetic approaches, a consideration of the inter- and intracellular localization of the proteins, along with the evidence for alternative splice forms. Current understanding of βCA tissue-specific expression patterns and what controls them are reviewed, and the physiological roles for which βCAs have been implicated are presented.