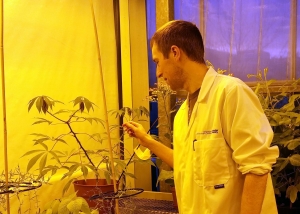 Doug Orr has always been interested in doing science, but one summer experience led him where he is today: working as a postdoctoral biochemist for Lancaster Environment Centre at Lancaster University.

The experience that propelled him there was a summer research program at the Australian National University (ANU), where Orr used genetic engineering and biochemistry in associate professor Spencer Whitney’s lab to examine the key photosynthetic enzyme Rubisco.

“I guess I’ve been a plant scientist ever since,” Orr said.

The work exposed him to a whole new world of research outside of the microbiology and biochemistry that dominated his bachelor’s program at La Trobe University. After completing his undergraduate studies he returned to ANU for his doctorate doing similar work, and for the first time in his academic career, he had the opportunity to use genetic engineering on plants, which he equated to “breaking things” and trying to fix them.

“It’s essentially studying things by breaking down or disrupting a process, and then learning more about what that process is and how it influences plant growth,” he explained. “That’s fun for me.”

Now, however, he works on a different side of plant science—biochemistry—for a project called Realizing Increased Photosynthetic Efficiency (RIPE), a multi-institutional effort to increase staple food crop productivity through photosynthetic improvements. Lancaster University and ANU are among the project’s partner institutions.

As a biochemist at Lancaster, Orr screens various different plants to see how their Rubisco enzymes turn carbon dioxide into energy. This mechanism is a focal point of RIPE research because instead of binding only with carbon dioxide, Rubisco can waste energy fixing oxygen, ultimately leading to reduced yields in many food crops.

By sampling a wide variety of plants, Orr and the rest of the Lancaster team are looking for forms of Rubisco that, for example, may waste less energy. They characterize the biochemical properties of these different Rubiscos and combine them with sequence information to find the amino acids responsible for differences in the biochemistry.

“From there, we work with colleagues at Liverpool and ANU to use this information to inform what sort of mutations they might make to food crops, and they test our hypotheses using model plant systems,” Orr said. “It’s interesting because we collaborate with ANU and my old lab, and they do the sort of work I used to with information we in Lancaster provide.”

“Plus it’s fun to keep in touch with people I spent a lot of time working with. It makes things more enjoyable," he added.

When asked what he does for fun, Orr said he dreams of one day being able to restore a classic car, but in the interim, he plays basketball and football. He also goes to the woods and mountain bikes when he gets the chance.

“I really enjoy the woods. In a sense, it’s kind of like our project, because there are so many different types of plants and some of them are very different from each other,” he said. “We’re deliberately looking at a very diverse range of plants, and we aim to look at a few forests' worth of different plant species in our search for a better Rubisco.”

So far, their data suggest that they may have underestimated the extent of variation in Rubisco from nature. Most importantly, a number of these species have versions of Rubisco that seem to be superior to the Rubisco found in some crops and show promise for helping to improve the photosynthetic efficiency of key crops.