It's done: by crossing plants and intervening on their genes, biochemists have managed to overcome billions of years of natural selection. They have succeeded in penetrating the heart of the most important biological process, the source of most energy and organic matter on Earth: photosynthesis. And they improved it. Up to 15% increase in crop biomass for a team from the University of Essex; 40%, for a team from the University of Illinois; and maybe soon 60% hope researchers from the Australian National University. Ten years after its launch, the international RIPE (Realizing Increased Photosynthetic Efficiency) project, in which all these laboratories participate, is producing first concrete results.

Tampering with photosynthesis? This crazy idea was launched 20 years ago ... "In a particular context, underlines Giovanni Finazzi, a researcher at the Laboratory of Cell and Plant Physiology in Grenoble. About twenty years ago, agricultural yields began to stagnate afterward. have already experienced many improvements. Photosynthesis has been identified as the next step."

It must be said that as powerful as it is on the planet, this phenomenon of converting the sun's energy into chemical energy has a fairly mediocre yield: only 5% of solar energy is converted into growth by the plant! The room for improvement is therefore enormous.

It remained to dive into the heart of the mechanics and identify the process itself in order to optimize it.

On paper, it seems simple: the plant captures CO2 and water, transforms them with light into sugar to feed and grow while releasing oxygen into the air. This machinery operates in a compartment located inside the cytoplasm of the plant cell, the chloroplast. Easy! Except that this mechanism relies on no less than 170 different processes, includes 2 interdependent cycles, 3 different ways of fixing carbon, and would even exploit phenomena described by quantum mechanics, the science of matter at the scale of the atom (see  S&V  n ° 1159). In fact, photosynthesis is one of the most arduous processes in biology, a nightmare of complexity that scholars have struggled with since its discovery in the 18th century.

The first difficulty was to identify the strategic keys which control its effectiveness. The teams involved in the RIPE project, therefore, began by simulating the entire process, from genes to the canopy, accurately reproducing the interactions between external conditions (temperature, sunshine, precipitation, etc.) and the process of photosynthesis, leaves down to the chloroplasts. This enabled them to identify two levers. The first concerns the mechanisms linked to light. The plant only uses part of it, which itself is poorly distributed on the leaves and is not very responsive to fluctuations in the sun. The second is an enzyme that is at the very heart of the photosynthesis process: RuBisCO. It is this which assimilates the carbon captured by the plant and which fixes it on a metabolite, RuBP. Other enzymes then convert this carbon into sugar, allowing the plant to thrive. Except that in 35% of cases, rather than carbon, RuBisCO fixes an oxygen molecule ... which produces waste: a slew of molecules that the plant must then eliminate or metabolize. This is photorespiration, a particularly energy-intensive process.

AT THE HEART OF CELLULAR MECHANICS

The teams then looked for a way to act on these two levers and identified five promising mechanisms (see infographic): canopy optimization; the relaxation of the protection of plants against the sun; the optimization of the passage of CO2 in the leaves; stimulation of the enzyme RuBisCO and, finally, the regeneration of the metabolite RuBP. Different research groups are dedicated to each of these axes, calling on the entire plant biology toolbox - from traditional crossbreeding to CRISPRCas9 molecular scissors which allow genes to be modified locally. The experiments focus on one plant in particular: tobacco, simple, and easy to manipulate genetically and in the field.

In order to already reach the precious enzyme RuBisCO and optimize its action, the Australian National University team had taken up another challenge in 2018. Again using the qualities of algae. These are in fact equipped with an additional organ, the carboxysome, a kind of bacterial micro-compartment that allows carbon to be drained. However, the researchers succeeded in inserting this carboxysome into the chloroplast of a tobacco plant, as close as possible to RuBisCO, thus opening up direct access to carbon. "A huge step forward for us,” says Ben Long of the Australian National University. It was first necessary to choose the right carboxysome, that is to say the one with the smallest possible genetic sequence, before recreating it to measure so that it would be suitable for tobacco, and then introduce it into the plant by biolistics: the piece of DNA has been propelled at high pressure to pierce the cell wall and insert itself into the chloroplast, the seat of the enzyme ... A real mechanical challenge. "Even after our manipulations, the carboxysome remains 5 to 6 times larger than what normally goes into the chloroplast!" exclaims Dimitri Tolleter, member of the RIPE project from 2013 to 2018, with the Australian university, and now a researcher at the University of Angers.

And the adventure does not end there: the team is now trying to introduce synthetic pumps into the membrane of the chloroplast so that a higher concentration of carbon dioxide reaches the enzyme RuBisCO… It is this technique which, according to researchers' calculations, could offer a spectacular 60% increase in yield! "Whereas today, it's already the jackpot when you reach 5% more yield in the fields!" smiles Dimitri Tolleter. 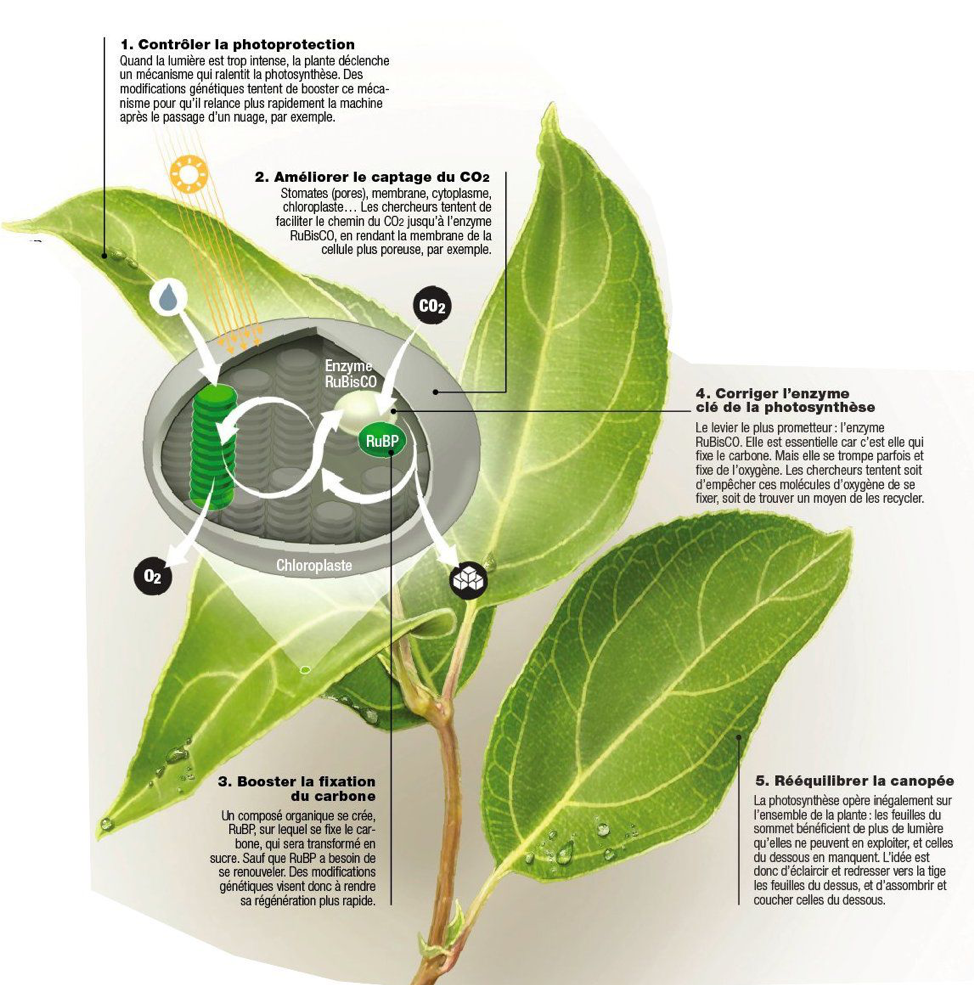 Not to mention that this summer, the third team from the University of Essex, for the first time, succeeded in boosting photosynthesis by stimulating not one, but two processes simultaneously. It has thus increased the yield of two species of tobacco by up to 15% by acting both on the regeneration of the metabolite RuBP, which hosts the carbon molecules, and the transport of electrons in the chloroplast, which makes it possible to operate the metabolite. photosynthesis. Better still: the researchers then realized that the transgenic plant also began to use water much more efficiently!

What to start dreaming of a super-plant, which would combine all the optimizations. Total ultra-photosynthesis, built strand of DNA after strand of DNA in dozens of laboratories. Even if there are still many obstacles, because "the more we transform a plant, the more we take the risk of seeing unexpected side effects.” But Dimitri Tolleter lets go all the same:  "Yes, such a super plant is not impossible on paper!"

However, it will still be necessary to test and improve the resistance of these laboratory specimens to real conditions. Because the more it is shaped to adapt to a very specific environment, the less resilient a plant is to environmental hazards - which are sure to multiply with climate change. Above all, it will obviously be necessary to succeed in moving from the laboratory plant - tobacco, chosen for its simplicity - to more complex organisms, such as corn, intended for food. Without counting the necessary ethical and ecological debate which would pose the arrival of these new GMOs in the fields… "It will take at least 15 years,” evaluates Ben Long.

But we can see that if the ultra-photosynthetic plant is still far from having reached the fields, it is already flourishing in laboratories.