How we can adapt plants to save our planet 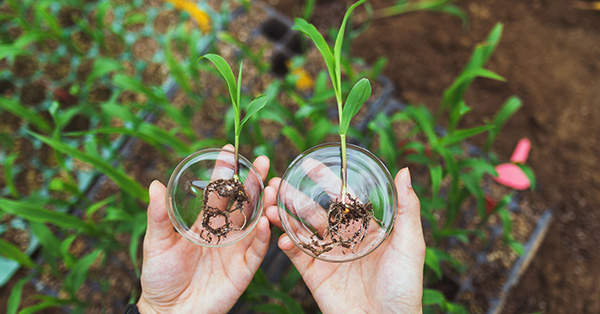 Plants hold the key to removing atmospheric carbon dioxide. Can we make them more efficient carbon storers and feed the planet in the process?

While filming the two most recent special episodes of Follow the Food, I visited several farms around the world that, on the surface at least, look like any other farm on the planet. But scratch below that surface and you will find some quite remarkable things growing.

The farmers and scientists I spoke to are trying to solve a very important problem: how can agriculture reduce its environmental impact, and perhaps even one day be used to reverse climate change?

When you consider the scale of the agricultural industry, which covers 1.5 billion hectares (5.8 million sq miles) of the planet's surface, you can sometimes lose sight of what is at its heart: plants.

Cutting down rainforests and digging up peatlands to create swathes of new farmland might be a significant driver of climate change, and needs to be stopped, but innovating with crops can help to mitigate some of this.

Crops, like all plants, draw carbon dioxide (CO2) from the atmosphere during the process of photosynthesis, which they use to generate stores of energy from sunlight. Some of that carbon is fixed in the soil, where it will remain if left untouched. Plants are part of a once balanced system that saw carbon cycling in and out of natural reservoirs in the land, sea, atmosphere and living things. So, could farmers redress the balance by using the vast amount of crops and land needed to feed us, as carbon sinks that capture and store carbon in the ground?

I asked Paul Hawken, the author behind Project Drawdown, which has modelled the 100 most substantive solutions to reversing global warming, why we need to rethink the carbon cycle. He says it is a misunderstanding to think of carbon as pollution – rather, it is part of a cycle that is out of balance.

The carbon stored on Earth vastly outweighs the carbon in our atmosphere. There is more than three trillion tonnes of carbon in farmlands, grasslands, forests, mangroves and wetlands – that is four times as much carbon as in the atmosphere, Hawken told me, adding that if we are able to increase stored carbon by 9% on Earth, just on the land, we will have sequestered all the carbon that humans have emitted since 1800. Hawken raises an interesting point: terms like ''carbon offsetting'' and ''net zero'' are commonly used, but to reverse the effects of climate change we will need to go beyond that by storing more carbon than we emit into the atmosphere.

And that doesn't include carbon stored in marine and aquatic systems. While visiting Portugal, I saw another innovator planting kelp forests to store carbon and perhaps one day be used as a food source. Kelp, the largest species of seaweed, is a type of photosynthesising algae and not a plant.

And what if we could make cows green too? Cow methane is not a problem with the animal, but the microbes in its stomach. You can suppress this microbial activity by adding small quantities of charcoal or seaweed to the cow’s diet – which has no impact at all on our health or the health of the animal.

By cutting open sections of their leaves, kelp spores can be harvested, dried, cooled and sprayed onto gravel which is then dropped into the sea. These stones, coated in kelp spores, then seed an underwater forest which only takes a few months to grow, quickly working to sequester carbon on the seabed.

Kelp is also a threatened species, so this work goes some way to protect biodiversity, too.

Kelp forests might look a little different to traditional farms, but seaweed is a natural source of the important EPA and DHA omega-3s, which are otherwise only found in animals. Kelp could one day be a very important source of low-climate impact nutrition.

Returning to dry land for a moment, I also had the privilege of visiting researchers at the University of Illinois's Ripe project, which is experimenting with the way plants grow. Photosynthesis is a process that has evolved over millions of years. So, it's strange to think that we could make the process better, but that is exactly what Lisa Ainsworth, the deputy director of Ripe, and her colleagues are trying to do.

The team here are modifying the genetics of plants to try to address more than one weakness in the way they photosynthesise – from boosting plants' efficiency, to increasing reaction times when they transition from shade to sun, and even altering the density of the leaves.

For example, in a field of plants, only the uppermost leaves photosynthesise at maximum efficiency. The leaves lower down are blocked are in the shadow of the leaves higher up, and so they receive less sunlight and don't photosynthesise as well. In fact, the lowest leaves might even contribute to carbon emissions (like animals, plants also respire, breathing in oxygen through their leaves and 'exhaling' carbon dioxide).

By making the uppermost leaves less dense, more light will penetrate lower down, meaning a greater surface area will be photosynthesising efficiently – that's the idea, anyway. The advances the team are making are still works in progress.

But it is an exciting time to be trying to fix the carbon cycle. There are opportunities for farmers to increase the amount of carbon that's stored in soil by taking a close look at what we grow and how we grow it.

In recent times, the term carbon offsetting has been used a lot, but what I know from speaking to experts is that it can be misused. The goal should be to leave as much carbon in the ground as possible, rather than to pay to continue to pollute as before, and plants will be key to achieving this.

* James Wong is an ethnobotanist and presenter of the BBC's Follow the Food series.

Follow the Food is a multimedia series by BBC Future and BBC World News that investigates how agriculture is responding to the profound challenges of climate change, environmental degradation and rapidly growing populations that face our global food supply chains. Follow the Food traces emerging answers to these problems – both high-tech and low-tech, local and global – from farmers, growers and researchers across six continents.