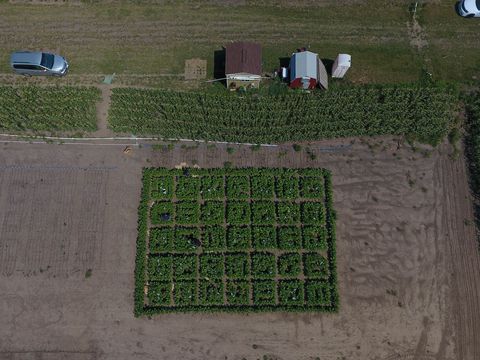 Without photosynthesis, life as we know it wouldn't exist on earth. When plants convert light energy into chemical energy, they release oxygen as a by-product. But over the past millennia, they've slowly become less effective at production. Researchers at the U.S Department of Agriculture and the University of Illinois have engineered a correction and figured out how to make crops that are 40 percent more productive in real-world farming conditions.

The problem lies with an enzyme known as rubisco, short for ribulose bisphosphate carboxylase/oxygenase. Rubisco has a crucial role in the photosynthetic process: It takes inorganic carbon dioxide and transforms it into organic carbon. However, for an enzyme that plays a crucial role for all life on earth, scientists describe it as "remarkably inefficient." Most enzymes can process thousands of molecules in the time it takes rubisco to process two or three.

Plants typically make up for this by creating lots and lots of rubisco—so much that it's the most ample enzyme on earth. And for the most part, it's worked. Rubisco has been converting carbon dioxide into organic carbon to the extent that earth's current atmosphere is rich with oxygen.

But the inefficient enzyme has encountered another difficulty. It's begun to confuse its natural diet of carbon dioxide molecules with oxygen. That's no good for photosynthesis. When rubisco grabs oxygen, as scientists say it does around 20 percent of the time, it forces the plant to undergo an energy-consuming process known as photorespiration. During photorespiration, a plant sends its enzymes through three different compartments within the plant cell.

“Photorespiration is anti-photosynthesis,” says lead author Paul South, a research molecular biologist with the Agricultural Research Service, in a press statement. “It costs the plant precious energy and resources that it could have invested in photosynthesis to produce more growth and yield.”

Over two years, the research team attempted to develop a more efficient version of photorespiration. Testing through 1,700 plants, they created three. These new methods of photorespiration use alternate sets of promoters and genes, allowing plants to achieve the same results while expending far less energy.

“Much like the Panama Canal was a feat of engineering that increased the efficiency of trade, these photorespiratory shortcuts are a feat of plant engineering that prove a unique means to greatly increase the efficiency of photosynthesis,” says Stephen Long, the Ikenberry Endowed University Chair of Crop Sciences and Plant Biology at Illinois and director of Realizing Increased Photosynthetic Efficiency (RIPE).

In field studies, these engineered plants were able to develop plants faster, grow taller, and produce around 40 percent more biomass.

Although only tested in tobacco (an ideal test subject due to its relative genetic simplicity and big ol' leaves), scientists now hope to expand testing to crops that make up the staples of many diets around the globe: soybeans, cowpeas, rice, potatoes, tomatoes, and eggplants. Scientists anticipate a decade-long journey toward gaining regulatory approval for the new engineering across the globe.

After that process, smaller farms in Sub-Saharan Africa and Southeast Asia could have royalty-free access to these engineered plants producing more oxygen than they have in a long time.