U of I researchers tackle world hunger 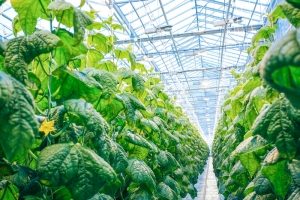 A research team from the University of Illinois Urbana-Champaign (U of I) is working on a project that might eventually change the world: tackling the growing issue of world hunger through increased crop yields.

The Realizing Increased Photosynthetic Efficiency (RIPE) project at U of I is focused on increasing crop yields in developing areas like sub-Saharan Africa and Southeast Asia by improving photosynthesis in staple crops.

Don Ort, research leader of the RIPE project, said one of the factors that determine yield potential is a crop’s ability to convert solar radiation into biomass -- the process of photosynthesis.

Ort said that some field crops convert about 1 percent of solar radiation into biomass, but crops have the potential to convert up to 5 percent, which is why RIPE is focusing on photosynthesis.

"It’s a yield determinate that has not yet been exploited, probably because there is not much natural genetic variation in that trait," Ort said.

"What we can do with genetic engineering is we can introduce that variability and introduce that superior photosynthetic trait by manipulating the genes of the plant," Ort said.

He and his team have a number of examples that show the genetically modified crops’ photosynthesis process went faster and the plants grew bigger in the field, Ort said.

By 2050, the world population is expected to grow from 7 billion to approximately 10 billion, according to Ort, and in order to feed everyone, global agricultural productivity will have to double on the amount of acreage that is being farmed now – and maybe less.

"Right now there are 120 million hectares under cultivation in the world, and that’s actually declining, primarily due to urbanization," Ort said.

In the United States, the decline has reached approximately 12 percent over the last 30 years, according to Ort.

Ort said the work he and his team are doing is gratifying and exciting, but also daunting.

"2030 is one breeding cycle away, and 2050 is about two breeding cycles away, so there’s really some urgency in discovering these traits now and getting them into the breeding pipeline so they can be delivered to the farmers’ fields in the timescale that they’re certainly going to be needed," Ort said.