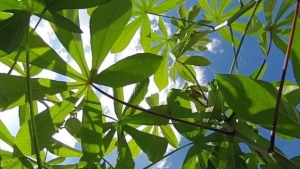 According to the U.N. Food and Agriculture Organization, farmers will need to produce 70 percent more food by 2050 to feed an estimated 9.2 billion people.

That's a problem, said Donald Ort, associate director of the Realizing Increase Photosynthetic Efficiency (RIPE) project at the University of Illinois, which is exploring ways to meet this challenge.

"I would argue that globally, we're not feeding everyone now," Ort said. "The projections clearly show that without some dramatic changes, the numbers of malnourished and undernourished are going to increase."

"When I give these seminars, they're not uplifting because a lot of it is bad news," he said. "The only good news is that we think that we understand that there are ways to address this."

The RIPE project, funded through a grant from the Bill and Melinda Gates Foundation, is tackling this problem by exploring ways to improve the efficiency of photosynthesis, the process in which plants use to convert carbon dioxide and light into chemical energy.

"Photosynthesis is really the only big unexplored route for crop yield improvement," said Johannes Kromdijk, a postdoctoral researcher on the project.

"The other factors have already been explored to quite some extent."

The project's scientists showed off their work Thursday to more than 60 researchers, journalists and industry leaders.

In a study published last year in the journal Science, RIPE researchers were able to increase tobacco plants' leaves and stems by 14 to 20 percent by increasing how quickly tobacco adjusts to shade.

Another experiment is developing ways to bypass an inefficient process called photorespiration, and another is trying to optimize the amount of the different types of enzymes used during a part of photosynthesis called the Calvin Cycle.

RIPE has been experimenting with tobacco because it is relatively easy to modify and propagate, and each lifecycle only lasts about three and a half months, Kromdijk said.

They're also confident the techniques used in tobacco will work in other crops.

"We believe, based on our models, that a lot of what we're doing in terms of improving photosynthetic efficiency will be plant independent," Ort said. "So some of the changes that we're making in tobacco plants and our model plants will work in soybeans and cowpeas and rice."

The Gates Foundation is focusing on improving food security by studying crops that are common in sub-Saharan Africa and southeast Asia, such as rice, cowpea and cassava, a starchy root vegetable that looks somewhat like a sweet potato.

"While the source of our funding is really targeting improving food security crops in Africa, these same kinds of traits could be a benefit to commodity crops that are grown in the United States," Ort said.

It usually takes about 12 years from the discovery of a new plant trait to make it into a farmer's field, Ort said.

Even if food production were to increase by 70 percent by 2050, other changes would need to be made to feed everyone.

"There are opportunities both from changing socially, in how we view food, but there's also opportunities in getting better mechanization and storage and varieties into the developing world," Ort said. "It's important to look holistically at the problem."