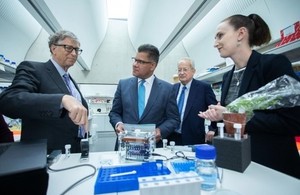 UK aid is tackling global food insecurity through a new project with the Bill & Melinda Gates Foundation to protect plants from the threat of climate change, pests, and diseases.

The new funding will allow scientists to research cutting-edge technology to protect crops and also to produce “super crops” that will be more efficient and withstand the impacts of climate change. For example, one of the projects will work to increase yields by harnessing major advances in photosynthesis [through the RIPE project].

International Development Secretary Alok Sharma and Bill Gates visited the Sainsbury Lab at the University of Cambridge yesterday (Monday 7 October). They met scientists working on advances in crop engineering to help plants capture nitrogen naturally and grow without the need for chemical fertilisers which can damage the environment.

Nearly 80% of people in the developing world rely on farming for their livelihoods but the impacts of climate change and the damage caused by pests and diseases have left millions struggling to grow enough crops to put food on the table.

Mr. Sharma and Mr. Gates Bill participated in a demonstration of revolutionary kit, developed by the John Innes Centre, which helps farmers diagnose crop diseases within hours - something that can typically take months to do.

DFID has partnered with the Gates Foundation since 2010 in the field of agriculture.

The new £38 million of UK aid will contribute to a portfolio of projects which will receive additional funding from the Gates Foundation.

The programme’s impact will be two-fold. First, it will contribute directly to securing global food supplies in the face of pest and disease threats, climate change and the increasing scarcity of natural resources. Secondly, the programme will improve the agricultural productivity of smallholder farmers in sub-Saharan Africa and South Asia, thereby reducing poverty at the household and community level, and contributing to economic growth at the national level. The projects will:

During the visit, there was a demonstration of a kit that helps farmers diagnose crop diseases within hours. It is a suitcase-sized laboratory that uses nanopore sequence technology to rapidly diagnose and monitor wheat rust in farmers’ fields. It can be used without electricity and in varying temperatures.

DFID is also supporting CGIAR with funding (announced January 2018) to help scientists identify the specific genes in crops that means they are more nutritious, grow faster and are more resilient to disease and extreme weather. This scientific work to create ‘super-crops’ will help up to 100 million African farmers lift themselves and their families out of poverty, in turn, building stability and prosperity, which will help African countries become our trading partners of the future.

The UN Food and Agriculture Organization suggests that global demand for food is estimated to increase by up to 40% by 2030 and 70% by 2050.

Written by the Department for International Development