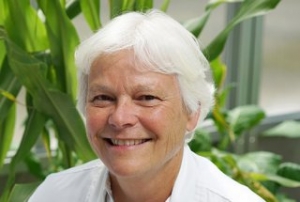 Plant scientist Professor Susanne von Caemmerer from The Australian National University (ANU) has been elected a Fellow of the Royal Society in the UK, the longest standing scientific academy in the world.

Professor von Caemmerer from the Research School of Biology and Deputy Director at the ARC Centre of Excellence for Translational Photosynthesis at ANU is among 50 outstanding scientists from around the globe who have been honored this year.

She joins a Fellowship of the most eminent scientists and engineers from across the UK and the Commonwealth, including names such as Newton, Darwin, Ian Frazer, Elizabeth Blackburn and ANU Vice-Chancellor Professor Brian Schmidt. Currently, there are more than 1600 Fellows, fewer than 70 of them Australian.

“I am thrilled and very honoured to receive this recognition for my research in plant science,” she said.

Professor von Caemmerer was elected for her contributions to the understanding of the process of photosynthesis by which plants transform sunlight and water into oxygen and sugars. She co-developed what is arguably the most widely used biochemical model in plant biology – the Farquhar, von Caemmerer and Berry model of C3 photosynthesis, the biochemical path used by plants such as rice and wheat.

Internationally renowned for her research on photosynthetic modeling, analysis of photosynthesis and stomatal function by genetic manipulation, and stable isotope fractionation in plants, Professor von Caemmerer began her career as a mathematician, graduating from ANU in 1976.

She then went on to develop an equally widely used model of C4 photosynthesis, used by plants such as sugarcane and sorghum and resolved the long debated and critical question of why there is so much Rubisco enzyme inside plant cells.

Professor von Caemmerer’s publications are among the highest cited works in plant science.

She was also recently acknowledged with the ANU’s highly regarded Peter Baume Award and the American Society of Plant Biologists’ Barnes award.

The Royal Society is dedicated to recognizing excellence in science and promoting science and its benefits for humanity. Its motto ‘Nullius in verba’ means ‘take nobody’s word for it’. It is an expression of the determination of Fellows to withstand the domination of authority and to verify all statements by an appeal to facts determined by experiment.

Professor von Caemmerer will attend a ceremony in London where she will be formally admitted as a Fellow.

Details about The Royal Society can be found at www.royalsoc.ac.uk.

By: the Australian National University Research School of Biology