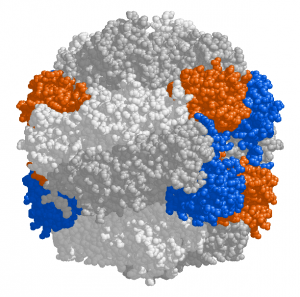 Cyanobacteria have evolved an extremely effective single-cell CO2 concentrating mechanism (CCM). Recent molecular, biochemical and physiological studies have significantly extended current knowledge about the genes and protein components of this system and how they operate to elevate CO2 around Rubisco during photosynthesis. The CCM components include at least four modes of active inorganic carbon uptake, including two bicarbonate transporters and two CO2 uptake systems associated with the operation of specialized NDH-1 complexes. All these uptake systems serve to accumulate HCO3- in the cytosol of the cell, which is subsequently used by the Rubisco-containing carboxysome protein micro-compartment within the cell to elevate CO2 around Rubisco. A specialized carbonic anhydrase is also generally present in this compartment. The recent availability of at least nine cyanobacterial genomes has made it possible to begin to undertake comparative genomics of the CCM in cyanobacteria. Analyses have revealed a number of surprising findings. Firstly, cyanobacteria have evolved two types of carboxysomes, correlated with the form of Rubisco present (Form 1A and 1B). Secondly, the two HCO3- and CO2 transport systems are distributed variably, with some cyanobacteria (Prochlorococcus mannus species) appearing to lack CO2 uptake systems entirely. Finally, there are multiple carbonic anhydrases in many cyanobacteria, but, surprisingly, several cyanobacterial genomes appear to lack any identifiable CA genes. A pathway for the evolution of CCM components is suggested.