A faster Rubisco with potential to increase photosynthesis in crops

A faster Rubisco with potential to increase photosynthesis in crops 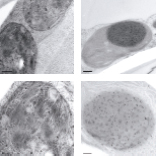 In photosynthetic organisms, D-ribulose-1,5-bisphosphate carboxylase/oxygenase (Rubisco) is the major enzyme assimilating atmospheric CO2 into the biosphere(1). Owing to the wasteful oxygenase activity and slow turnover of Rubisco, the enzyme is among the most important targets for improving the photosynthetic efficiency of vascular plants(2,3). It has been anticipated that introducing the CO2-concentrating mechanism (CCM) from cyanobacteria into plants could enhance crop yield(4-6). However, the complex nature of Rubisco's assembly has made manipulation of the enzyme extremely challenging, and attempts to replace it in plants with the enzymes from cyanobacteria and red algae have not been successful(7,8). Here we report two transplastomic tobacco lines with functional Rubisco from the cyanobacterium Synechococcus elongatus PCC7942 (Se7942). We knocked out the native tobacco gene encoding the large subunit of Rubisco by inserting the large and small subunit genes of the Se7942 enzyme, in combination with either the corresponding Se7942 assembly chaperone, RbcX, or an internal carboxysomal protein, CcmM35, which incorporates three small subunit-like domains(9,10). Se7942 Rubisco and CcmM35 formed macromolecular complexes within the chloroplast stroma, mirroring an early step in the biogenesis of cyanobacterial beta-carboxysomes(11,12). Both transformed lines were photosynthetically competent, supporting autotrophic growth, and their respective forms of Rubisco had higher rates of CO2 fixation per unit of enzyme than the tobacco control. These transplastomic tobacco lines represent an important step towards improved photosynthesis in plants and will be valuable hosts for future addition of the remaining components of the cyanobacterial CCM, such as inorganic carbon transporters and the beta-carboxysome shell proteins(4-6).