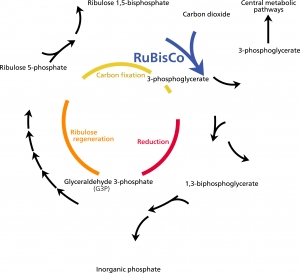 Genetic modification to increase the specificity of Rubisco for CO2 relative to O-2 and to increase the catalytic rate of Rubisco in crop plants would have great agronomic importance. The availability of three-dimensional structures of Rubisco at atomic resolution and the characterization of site-directed mutants have greatly enhanced the understanding of the catalytic mechanism of Rubisco. Considerable progress has been made in identifying natural variation in the catalytic properties of Rubisco from different species and in developing the tools for introducing both novel and foreign Rubisco genes into plants. The additional complexities of assembling copies of the two distinct polypeptide subunits of Rubisco into a functional holoenzyme in vivo (requiring sufficient expression, post-translational modification, interaction with chaperonins, and interaction with Rubisco activase) remain a major challenge. The consequences of changing the amount of Rubisco present in leaves have been investigated by the use of antisense constructs. The manipulation of genes encoding Rubisco activase has provided a means to investigate the regulation of Rubisco activity.