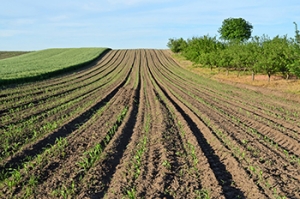 The distribution of resources between enzymes of photosynthetic carbon metabolism might be assumed to have been optimized by natural selection. However, natural selection for survival and fecundity does not necessarily select for maximal photosynthetic productivity. Further, the concentration of a key substrate, atmospheric CO2, has changed more over the past 100 years than the past 25 million years, with the likelihood that natural selection has had inadequate time to reoptimize resource partitioning for this change. Could photosynthetic rate be increased by altered partitioning of resources among the enzymes of carbon metabolism? This question is addressed using an “evolutionary’’ algorithm to progressively search for multiple alterations in partitioning that increase photosynthetic rate. To do this, we extended existing metabolic models of C-3 photosynthesis by including the photorespiratory pathway (PCOP) and metabolism to starch and sucrose to develop a complete dynamic model of photosynthetic carbon metabolism. The model consists of linked differential equations, each representing the change of concentration of one metabolite. Initial concentrations of metabolites and maximal activities of enzymes were extracted from the literature. The dynamics of CO2 fixation and metabolite concentrations were realistically simulated by numerical integration, such that the model could mimic well-established physiological phenomena. For example, a realistic steady-state rate of CO2 uptake was attained and then reattained after perturbing O-2 concentration. Using an evolutionary algorithm, partitioning of a fixed total amount of protein-nitrogen between enzymes was allowed to vary. The individual with the higher light-saturated photosynthetic rate was selected and used to seed the next generation. After 1,500 generations, photosynthesis was increased substantially. This suggests that the “typical’’ partitioning in C-3 leaves might be suboptimal for maximizing the light-saturated rate of photosynthesis. An overinvestment in PCOP enzymes and under-investment in Rubisco, sedoheptulose-1,7-bisphosphatase, and fructose-1,6-bisphosphate aldolase were indicated. Increase in sink capacity, such as increase in ADP-glucose pyrophosphorylase, was also indicated to lead to increased CO2 uptake rate. These results suggest that manipulation of partitioning could greatly increase carbon gain without any increase in the total protein-nitrogen investment in the apparatus for photosynthetic carbon metabolism.