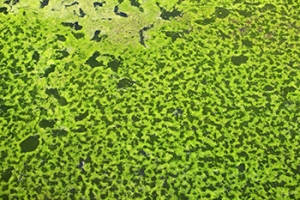 Crop yields need to nearly double over the next 35 years to keep pace with projected population growth. Improving photosynthesis, via a range of genetic engineering strategies, has been identified as a promising target for crop improvement with regard to increased photosynthetic yield and better water-use efficiency (WUE). One approach is based on integrating components of the highly efficient CO2-concentrating mechanism (CCM) present in cyanobacteria (blue-green algae) into the chloroplasts of key C-3 crop plants, particularly wheat and rice. Four progressive phases towards engineering components of the cyanobacterial CCM into C-3 species can be envisaged. The first phase (1a), and simplest, is to consider the transplantation of cyanobacterial bicarbonate transporters to C-3 chloroplasts, by host genomic expression and chloroplast targeting, to raise CO2 levels in the chloroplast and provide a significant improvement in photosynthetic performance. Mathematical modelling indicates that improvements in photosynthesis as high as 28% could be achieved by introducing both of the single-gene, cyanobacterial bicarbonate transporters, known as BicA and SbtA, into C-3 plant chloroplasts. Part of the first phase (1b) includes the more challenging integration of a functional cyanobacterial carboxysome into the chloroplast by chloroplast genome transformation. The later three phases would be progressively more elaborate, taking longer to engineer other functional components of the cyanobacterial CCM into the chloroplast, and targeting photosynthetic and WUE efficiencies typical of C-4 photosynthesis. These later stages would include the addition of NDH-1-type CO2 pumps and suppression of carbonic anhydrase and C-3 Rubisco in the chloroplast stroma. We include a score card for assessing the success of physiological modifications gained in phase 1a.